Q: How does SnapSync work with RMAN ?

SnapSync links with production databases via standard RMAN APIs and requests all files and logs for the initial snapshot and compresses them in Delphix. Subsequent snapshots load only blocks changed since the last snapshot.  Each snapshot generated represents a full TimeFlow that can be instantly provisioned as a VDB.

Q: Why are there are no RMAN incrementals (backup pieces) - where do they go on the Delphix Engine and why don't we see them (given that we are using RMAN on the source to push incrementals) ?

If a datafile does exist on ZFS it means the stream from the source is going to be incremental.

So how do we construct a viable datafile using an incremental source ? - We use a ZFS snapshot of the previous full backup (in the initial snapsync) and then update on the changed blocks in the datafile from the incremental stream.

Q: Does Delphix work in environments that have other applications using RMAN ?

Yes. Delphix attempts to minimise the impact its own RMAN backups has on other RMAN based backup systems.  It is advisable however to have Delphix SnapSync jobs be scheduled at different times from these third party applications to ensure optimal operation.

Q: Does the initial load of a database allow for normal operation on the database ?

Yes, the initial load of a database does not interfere with other operations on the database.

Q: What is the difference between SnapSync and LogSync ?

Q: What is the default retention policy for the snapshots and logs?

One week. It can be changed from the Policy Management Screen. New Retention policies can be created and applied to dSources as well as VDBs.

Q: What is the default SnapSync schedule ?

Q: What happens when the SnapSync does not complete within the allotted duration ?

The SnapSync job is then suspended and restarted during the next run. For initial loads, the job continues from where it was left off. For subsequent SnapSyncs, the job will start from the beginning. Because SnapSyncs after the initial load are incremental in nature, starting a suspended job from the beginning should not result in full scans of the database if BCT is enabled.

Q: Can SnapSync be scheduled to run multiple times in a day ?

Yes. If we use the "By Hours or Minutes" Schedule type when creating or modifying a policy, we can schedule the SnapSync to run at a fixed interval.

Q: Can we have multiple SnapSync policies to a dSource ?

Yes. This has to be done from the CLI though. Please refer to the 'policy' subcommands in the "Delphix Engine Command Line Reference" document.

Q: Can a snapshot be taken outside of a policy window ? 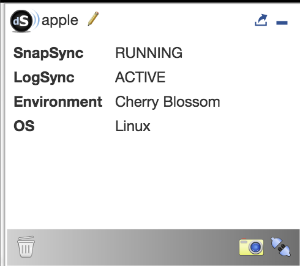 Q: How can we disable a SnapSync ?

This can be done from the policy management screen. Please choose a policy of None under SnapSync for the database of interest.

Q: What does unlink (detach) of a dSource do?

Unlinking (detaching) disassociates a dSource from its source database, in effect it removes the link that ties the 2 objects together. You can leave a dSource unlinked indefinitely and the dSource will reflect the state of the source database as of the remaining snapshots and archive logs.  An unlinked dSource is still subject to retention policies unless you explicitly remove them. You can relink (attach) to the same source database or to a different source database assuming that the new database is the same OS and Oracle version and has the same incarnation ID. So, for example, moving a dSource between primary and standby versions of the same database. More information can be found at the following links:

Q: My scheduled SnapSync(s) are running slowly, what should I do ?

Verify that BCT is still enabled on the dSource's database. You can do this via the following command.